Hack-n-Tell #2 in the History Books

With the second Hack-n-Tell going into the history books, we can say that this was our best one yet! The event was held at The Commons, which turned out to be a fantastic venue since it is an organization geared towards startups. After all was said and done, we had a lot of impressive people show off some impressive products. These innovations ranged from creative video games to automated Sumo Bots. 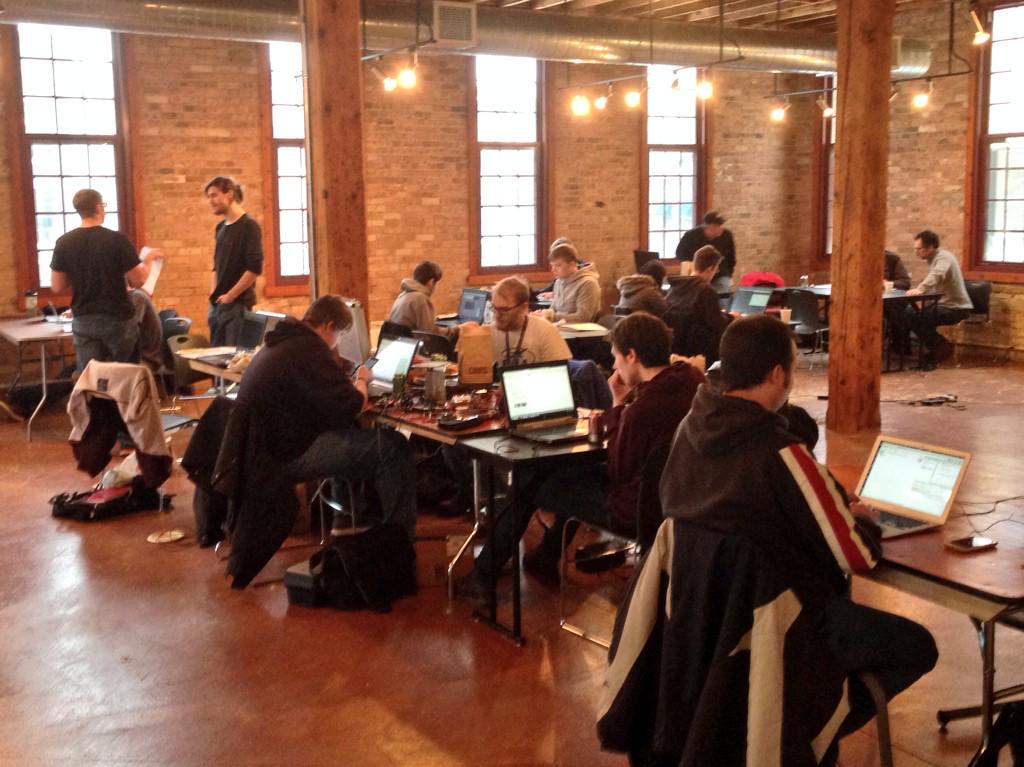 A hack-n-tell (or hackathon) is a place for developers to network, eat free food, and most importantly, build something awesome. Our goal with the hack-n-tell is to create an environment free of business plans, investors, and other formalities that could suppress creativity. So far the results have been great, and are excited for future events.

The developers were given eight hours to hack together a product. Many utilized this time to learn new languages and frameworks and create implementations for their project ideas. It was great to hear so many people start their presentations with "Today I learned how to..."

Firebase is a fairly new technology that was created to make realtime apps. The presentation of this sample website demonstrated just how powerful it is through sharing pictures in real time.

Work week is an app for iOS that assists the user to keep track of the hours that they worked. When the user reaches their required number of hours, the app will notify you that your work week is over. In the future, the developer said that he wanted to add a GPS feature so that the hours do not need to be logged manually.

The pinball game was recreated in attempts to better learn video game physics and to recreate an awesome game that everybody knows and loves.

La Cucaracha is a game that was created by the MSOE Game Dev Crew. The idea for the game was ... by a real life experience where one of the developers found a cockroach in her room! In the game, you play as a cockroach where the main objective is to run past the humans unnoticed.

When the developer tried to explain her latest venture, she felt that merely explaining the vacation was much different than what she experienced. This is the main motive for creating Travel App. It is a platform designed to showcase pictures and routes of your latest travel ventures. At the end of the day, the developer presented the sleek designs that would soon become Travel App.

The Quilt Pattern Generator is a web app that was created to help find inspiration for quilt patterns. With the click of a button, you can get an awesome looking pattern.

Decide is a game that was also created by a member of the MSOE Game Dev Crew. This 2D platformer takes place inside of a very large monster where the goal is to find and kill all of the gods within it. In the future, the developer is looking to create more levels for the game.

Kinetic Strike is a web-based space tactics game in which the players compete over a hex grid to try and wipe out the other player's fleet. It was built using Elixir, Phoenix, and WebGL. Eventually the team is planning on wrapping the lobby-based play in a persistent MMO universe.

A couple developers heard of a cool framework called meteorjs, so they decided to hack together a small game with it. Meteor Robot Battle is a grid, turn based game where the objective is to defeat the enemies by pushsing them into a hole.

Sumo Bot is an automated robot created by a MSOE student. The robot can be remotely controlled by infrared signals, similar to how a television is controlled.

ISS web stream is a hardware hack created by an MSOE student. The hardware is composed of an old laptop screen and a raspberry pi. With this, he was able to display a live stream of earth from space. His plan is to put it in a picture frame and place on the wall next to his bed.

Rock Paper Scissors is exactly what it sounds like; a web app that allows users to play rock paper scissors anonymously with others over the internet. It is based on bitcoin technology to make the game decentralized.

r/aww keyboard is made by one of the RokkinCats, Josh Holtz. This is a third party keyboard for iOS that pulls images from various subreddits and places them in the keyboard. Sharing cute picture of cats has never been easier! Simply click the image that you want to share, and send it to your friends.

Asteroid Clone is a 2D top-down space game where the objective is to destory all of the asteroids on the map. If the asteroids are not destroyed within a given time, enemies will begin spawning and will try to shoot your spaceship down.

Recently, MSOE removed their sales mailing list. This mailing list was basically the Craigslist of MSOE; it allowed students to post items that they were looking to get rid of and connect them to potential customers. Two students from MSOE decided to seek this out and make a service to stand in its place.

Hack N Connect is a social networking app that helps people get connected to money, people, and customers. It is perfect for somebody who is developing a product since all of these resources are now at their fingertips.